Skagway and the White Pass Route 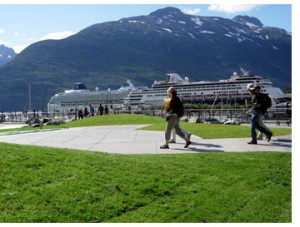 For over a hundred years, Skagway has served as the primary port access for the Yukon Territory. A small town at the northern reaches of Lynn Canal, Skagway attracts nearly a million visitors a year. They come to see the Klondike Gold Rush National Historic Park, ride the White Pass and Yukon Route Railroad (WP&YR), and hike the Chilkoot Trail. Most visitors arrive by cruise ship making the Port of Skagway the third busiest cruise ship destination in Alaska. The Klondike Highway and WP&YR rail bed represent the only land routes out of town, both crossing north over White Pass. The Alaska Marine Highway System and a single runway airport serve Skagway.

Pre-Gold Rush History – Prior to the Stampeders of 1897, the floodplain that Skagway rests on was occupied by the Tlingit Natives of Southeast Alaska. A mild climate and rich natural resources made the region a perfect location that fostered native culture for thousands of years. The Chilkoot Tlingit had villages near Taiya Inlet, at both Dyea and Skagway, and controlled trade into interior Canada through the Chilkoot and White Passes. Trade of eulachon oil, dried fish, pelts and hides continued with interior peoples until the Gold Rush 1897.

Klondike Gold Rush of 1897 to 1900 – Discovery of gold in the Yukon sparked a world known stampede of prospectors into the Skagway region. Dyea held the route advantage with its nearby Chilkoot Trail until construction of the White Pass and Yukon Route Railroad (WP&YR) was completed through White Pass and onto Whitehorse, Yukon. Dyea quickly faded and the future of Skagway was secured.

Klondike Gold Rush National Historic Park (KLGO) – Established in 1976, KLGO manages a six block long historic district in downtown Skagway, the Chilkoot Trail and a Visitor’s Center in Seattle, Washington. Fourteen historic buildings from the era have been fully restored by the Park, fitting with its mission to preserve and interpret the history surrounding the Klondike Gold Rush of 1897 to 1898. Headquarters and the Park’s Visitor Center are located in the historic WP&YR depot at 2nd Avenue and Broadway. 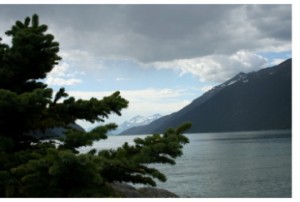 White Pass and Yukon Route Railroad (WP&YR) – Known as the Scenic Railway of the World, WP&YR is one of the few narrow gauge railroads still remaining in operation. Scenic train tours take visitors through the rugged coastal mountains, over historic White Pass and on to Fraser, British Columbia. Extended trips are available past Fraser to Carcross, Yukon. Whistle stop service is available for hikers coming off the Chilkoot Trail at Bennett, British Columbia and at the trailheads of the Laughton and Denver Glacier trails.

Abundant Hiking – The Municipality of Skagway in cooperation with several other agencies has developed a significant number of trails through use of a comprehensive Community Trails Plan. There are trails for backpackers, paddlers, and hikers of every skill level.

Dewey Lakes Trail System – Managed by the Municipality of Skagway

Trails Near Town – Managed by the Municipality of Skagway

Water Routes – Managed by the Municipality of Skagway