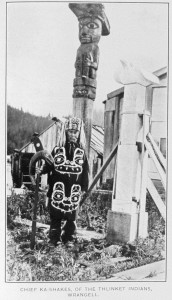 Wrangell Island Alaska is a community steeped in rich history, home to people for thousands of years. It is an island community in southern Southeast Alaska that has experienced the boom and bust resource development process so prevalent in Alaska’s past. Wrangell Island, strategically overlooking the mouth of the Stikine River, has been governed by four nations.

People have lifeways dependent on subsistence gathering of food, commercial fishing, logging of the Tongass National Forest, and lately the tourism trade. Wrangell retains its unique character in a time of homogeny; gritty, independent and industrious.

The town of Wrangell is located on the extreme northern tip of the same named island. Wrangell is in the heart of the Tongass National Forest, an immense expanse of temperate rain forest. Tucked directly next to the mainland, the community lies some thirty miles from the border of British Columbia, Canada and is about halfway between the Alaskan cities of Ketchikan and Juneau.

History – Inhabitants settled Wrangell Island long before European contact with the coastal shores of Alaska. Tlingit people lived in settlements along the island and controlled trade with Natives of Canada’s interior via the Stikine River that passes through the coastal mountains. Wrangell was an outpost of Russian-America with establishment of Redoubt St. Dionysius built to protect the fur trade from Hudson’s Bay Company in 1834. Under the British flag, Hudson’s Bay Company leased land south of Cape Spencer and founded Fort Stikine to replace Redoubt St. Dionysius. On 18 October 1867, Amercian Secretary William Steward negotiated with Russian ambassador Baron Eduard de Stoeckel to purchase the Alaska Territory for $7.2 million. The United States became the fourth country to rule over Wrangell after the Tlingit, Russians and English. 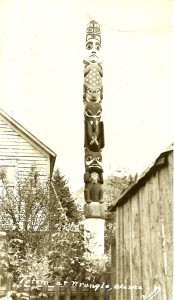 Wrangell was one of the first jumping off points for prospectors in the Cassiar discovery of 1877 and the Yukon gold rush of 1898. Jefferson “Soapy” Smith and Wyatt Earp started their infamous Alaska careers in Wrangell. Naturist John Muir first visited Alaska in a visit to the island to meet his friend a Presbyterian minister and travel up the Sitkine River. Read about Wrangell in Muir’s books Travels in Alaska

and Stickeen. By 1900, Wrangell was a premier commercial fishing port and slowly transitioned to becoming dependent on the timber industry. There was a collapse of the timber based economy in the early 1980′s from which the town has not fully recovered. Cruise ships visit the community, but the numbers have been cyclical.

Activities – The U.S. Forest Service operates a bear and wildlife viewing observatory 35 miles south of Wrangell at Anan Creek. This unique facility has wooden platforms strategically placed above salmon choked Anan Creek and Lagoon. In season, it is difficult not to see many Black and an occasional Brown (Grizzly) bear. Many activities are dependent on the Stikine River. The Stikine is a trans-boundary river that crosses through the rugged coastal mountains is navigatable some 130 miles to the settlement of Telegraph Creek, British Columbia. There are natural hot springs, Forest Service cabins, glaciers and wildlife found along the banks of the great river. Wildlife watchers will want to have a copy of Nature of Southeast Alaska: A Guide to Plants, Animals, and Habitats by Rita O’Clair and Robert Armstrong

The City of Wrangell recently completed construction of the James and Elsie Nolan Center, a multi-purpose facility that houses the community museum and visitor’s center. A short walk from the visitor’s center brings you to the small boat harbor where you can see a variety of commercial fishing vessels and visit Chief Shake’s House on a small island accessible from a footbridge out of the harbor. This tribal house is an accurate replica built in the Depression by members of the Civilization Conservation Corps. 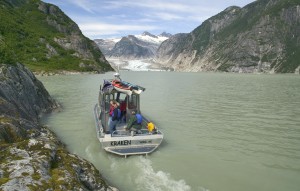 Guide/Outfitter – Alaska Vistas and their sister company Stickeen Wilderness Adventures offer trips to view bears at the Anan Observatory, jet boat rides to see glaciers and sights along the Stikine River, extended rafting trips on the Stikine River, runs kayak expeditions, supplies drop offs to Forest Service Cabins, and offers outfitting support for independent travelers. The company has operations based at the Wrangell City Dock and rents sea kayaks from this location. This group is an excellent resource for the visitor interested in getting the most out of trip to the region and enjoy my highest recommendation.