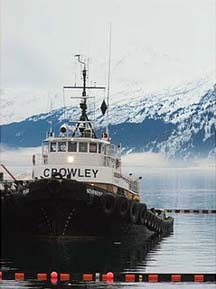 On December 23, 2009, Crowley Maritime Corporation’s tugboat Pathfinder was serving as an ice scout vessel in Prince William Sound. At about 6:18 pm that evening, the 136-foot vessel ran aground on Bligh Reef, the same reef on which the Exxon Valdez grounded twenty years earlier. The Pathfinder grounding investigation released by Coast Guard showed areas of concern in the operation of the tug.

The grounding of the Pathfinder caused extensive damage to its hull opening two fuel tanks along its centerline. Crowley initially estimated that 6,410 gallons of diesel fuel were released into the water, based on its estimate of the amount of fuel in the tanks at the time of the incident. However, when the vessel was subsequently dry-docked, 1,088 gallons of diesel were found remaining in the damaged fuel tanks, resulting in Crowley reducing its estimate of the amount spilled to 5,322 gallons.

The Coast Guard’s official report on the Pathfinder incident, released in May of this year, lists a number of factors that contributed to the event. At the root of these factors lies a story of inattention and complacency on the part of the tug’s master and crew, resulting in their failure to follow standard procedures, poor communication between them, and a loss of situational awareness.

The Pathfinder’s mission was to help protect the Sound’s environment by serving as an ice scout. Crowley is known for its professionalism and the tug’s grounding shook management of the company to its core. The company stepped up to address issues related to the incident and was painfully honest after the incident about the mistakes and omissions of its crew.

Crowley launched a thorough investigation of the incident, and shared its findings with the Coast Guard, the state, and the public. However, results of the Coast Guard’s investigation into the grounding were not released until May of 2011. Coast Guard officials said that delays in releasing its reports stemmed from the complexity of the investigation and the need for thorough vetting of information before it was released. Coast Guard representatives Captain Adam Shaw and Commander Darryl Verfaillie provided a comprehensive report on the Pathfinder grounding to the council’s board of directors in May of 2011.

The picture painted of the incident by the Coast Guard’s report points to many actions that must be taken to prevent this sort of thing from happening again. Like many accidents, there wasn’t a single mistake that caused the grounding of the Pathfinder. Crowley and Coast Guard investigators found a number of questionable practices being employed by the tug’s crew, some of which joined together to cause the mishap.

Crowley had a comprehensive set of policies and procedures in place to prevent accidents like the Pathfinder grounding. One focus of the Coast Guard’s investigation centered on the human behaviors and errors related to company policies which the crew did not follow in the moments before the grounding. Prior to the incident, company requirements of the crew included:

Crowley and the Coast Guard reported that the crew had not followed these procedures, and that their failure to do so was the immediate cause of the accident. As a result of its investigation, Crowley terminated the captain and second officer and disciplined another employee.

The Coast Guard report cited a number of other factors that may also have played a role in the grounding incident:

Following the grounding, the captain of the Pathfinder made a decision to move the tug off the reef and proceed to a safe anchorage. The Coast Guard report noted that the captain made no attempt to ask for guidance from others and had no idea of the damage sustained to the vessel before taking this action.

The Coast Guard report also noted that an electronic chart plotter had been removed from the tug before the incident. However, according to Crowley, this plotter is not USCG-approved navigation equipment and the vessel carried operable radars and GPS which the crew could have used to accurately track the vessel’s position.

Several of the issues listed in the report were included in a list of safety recommendations sent to Crowley by the Coast Guard soon after the incident. Crowley has already adopted those recommendations.