Rate and Scale of Arctic Ocean Acidification is Unparalleled 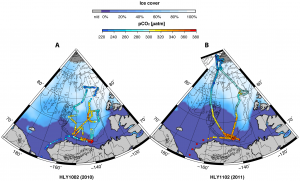 Researchers have found the rate and scale of Arctic Ocean acidification is unparalleled in recent history. Some 20 percent of the Canadian Basin has become more acidic in a short period of time. Swiftly melting sea ice is being seen as the primary cause of this increase in acidification. Seawater absorbs around 25 percent of the carbon dioxide that is released into the atmosphere. The addition of carbon dioxide to water increases its acidity.

Many marine creatures fix calcium out of the water to form their shells. This includes organisms like clams, shrimp, crab and corals. A decrease in pH lowers their ability to build shells. The pH scale is used to describe acidity or alkalinity of a liquid, on a scale of 0 to 14. The lower the number, the more acidic a liquid becomes, distilled water is considered neutral and has a pH value of 7.

Oceanographer Lisa Robbins says, “A remarkable 20 percent of the Canadian Basin has become more corrosive to carbonate minerals in an unprecedented short period of time. Nowhere on Earth have we documented such large scale, rapid ocean acidification” according to lead researcher and ocean acidification project chief.”

The reduction of sea ice in the Arctic is leaving more water open to adsorption of carbon dioxide that lowers its pH level. Along with increased adsorption of carbon dioxide, melting sea ice introduces fresh water into the marine ecosystem, diluting the amount of calcium available to its organisms. Alaska’s crab and shrimp fisheries could be greatly affected by increased ocean acidity.

The research report: Baseline Monitoring of the Western Arctic Ocean Estimates 20% of Canadian Basin Surface Waters are Undersaturated with Respect to Aragonite has been published online at PLOS ONE. PLOS ONE (eISSN-1932-6203) and is a peer-reviewed, online publication that reports on research from any scientific discipline.