Effects of an Alaskan Earthquake Generated Tsunami on the California Coast 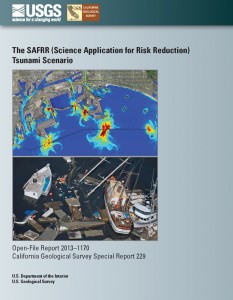 A group of researchers has been exploring the potential effects of an Alaskan earthquake generated tsunami on the California coast. The collaboration between the U.S. Geological Survey (USGS), National Oceanic and Atmospheric Administration (NOAA) and California Office of Emergency Services has generated what they are calling a Science Application for Risk Reduction (SAFRR) Tsunami Scenario. Looking at the past history of tsunamis generated by earthquakes in Alaska, the scenario tries to quantify areas of flood inundation, damage to waterfront infrastructure, environmental impacts and emergency management concerns for residents along the California coast.

This effort is important to coastal residents of California. The state has been struck by tsunamis generated in Alaska multiple times. Significant damage and loss of life occurred in Half Moon Bay and Crescent City stemming from earthquakes occurring in 1946 and 1964. The scenario is being based on an Alaska earthquake and resulting tsunami occurring at 1157 on March 27, 2014, commemorating the fiftieth anniversary of the 1964 Alaska Good Friday earthquake. A tsunami wave generated by this type of earthquake would travel to Crescent City in four hours and reach San Diego in six hours.

Tsunami Modeling – Several teams of scientists produced computer models of tsunami wave fields generated by the scenario earthquake. It is interesting to see that the largest waves generated by an earthquake reaching California would come some seven hours after the initial waves reach shore. At longer distances, tsunami waves take time to attenuate. Based on the shape of the California coast, with its shift to the east, south of Lompoc, the hazards presented by an Alaska generated tsunami are less for residents of southern California. Researchers did note that parts of southern California would be vulnerable due to low-lying areas, concentrations of people and coastal infrastructure, and bathymetry.

Inundation Mapping – Planners used the tsunami wave data to determine the amount of inundation that would be seen along the California coast. The scenario was based on a tsunami wave reaching shore at high tide. A wave striking the coast at a high tide would cause many times more flooding, than at lower stages of water. Topography is key to determining inundation levels. More than half the coastline of California is composed of cliffs, limiting wave run up to the beaches. In this SAFRR simulation, only about forty percent of the California coast would see significant flooding. Even at this level, it is estimated that 92,000 residents and 260,000 visitors to parks and beaches would be in the tsunami inundation zone. Evacuating this number of people in a six or seven hour window would be challenging.

Property Damage – Tsunami waves cause significant damage to coastal infrastructure due to their strong and erratic currents. In this scenario, researchers believe that half of the marina docks would be destroyed and a third of all boats present would be sunk or damaged. Based on the experiences seen in Alaska after the Good Friday earthquake, California ports and marinas will see significant fire outbreaks due to damaged tank farms. Since boats at sea have a lower risk of damage from tsunamis, the scenario predicts a higher level of damage to boats in northern California. This is due to the selected period being off season for commercial fishing and most fishermen would be away from their moored boats. There would be enough time with a tsunami coming from Alaska to alert operators to take their boats to sea and warn others underway to remain at sea. One major planning issue will be finding ports and harbors able to accept returning boats after a tsunami.

Environmental Impacts – As seen in the 2011 9.1 magnitude Tohoku, Japan earthquake, the marine debris generated by a major tsunami is a substantial environmental hazard. This can come from destroyed vessels, docks, floats and shore facilities. Other environmental effects of a tsunami include contamination from ruptured chemical and fuel tanks, oil from sunken boats, runoff from agriculture areas and redistribution of contaminated materials from historic spill sites. The cleanup after a major tsunami event would cost millions of dollars and take years to complete. Many California beaches would suffer erosion and cleanup efforts would cause additional damage to stressed shorelines. Many ports and harbors would need dredging before they would be useable again.

Economic Costs – Trying to calculate the costs of a major tsunami reaching the California coast is daunting. Damage to upland port cargo is estimated to be $100 million and port trade downtime would cost $1.2 billion. Coastal commercial fishing along the California coast generates some $78 million a year. A tsunami would substantially reduce this value. It would take something like $3.4 billion to replace Californian marinas, coastal facilities and ports. Researchers estimate more than 69,000 single family homes would need to be replaced.

The Alaska Science Application for Risk Reduction Tsunami Scenario highlights the shortcomings that exist in our ability to respond adequately to a tsunami event. This shortfall is the result of little experience with tsunamis, little public awareness of earthquake and tsunami effects, a lack of planning and limited public funding. Another factor that needs to be considered is the ability of the environment to absorb a tsunami or its resilience to mitigate floods. Loss of wetlands and estuaries reduces resiliency. The SAFRR is meant to be a tool for policymakers that offers suggestions on how to improve a local or regional response to a tsunami and deal with its after math.

The report highlights the need for preparedness saying, “The trick will be to understand the nature of the tsunami to come, its impacts, and what the public needs to know ahead of time to understand what to do to save their lives and protect their property when the warning comes. While we may have a warning window on the day (or night) of the tsunami, it can be years between damaging, life threatening events. Sustaining public preparedness and government capabilities to respond to this specific threat is key. When the next tsunami comes from Alaska, we will have only five and one-half hours to prove we know what to do.”

This scenario is broken into multiple chapters that are available for online viewing. At 897 pages, it is probably too much to adsorb at one sitting, but the individual chapters focus on specific areas of interest. As seen with recent major earthquakes occurring in Alaska, Chile and Japan, it is not a matter of if a tsunami will reach California, it is rather an issue of when an incident will occur. It is always better to be prepared for a potential emergency, than deal with it ad hoc after it occurs.