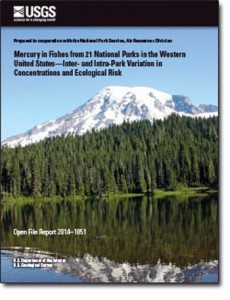 Unlike the majority of parks found in the lower states, many national parks in Alaska accommodate subsistence hunting and fishing activities. Many people in Alaska depend on subsistence harvests for their livelihoods. Based on the initial results of this study, it will be important to better define the human health risks associated with consuming fish from these northern parks.

One benchmark used in the study was to look at the number of fish sampled that exceed the human risk thresholds developed by the Great Lakes Advisory Group (GLAG) for mercury consumption. Eighty to 85 percent of the fish sampled in Wrangell-St. Elias NP and Lake Clark NP exceeded the GLAG guidelines for unlimited human fish consumption. Mercury levels at these same two parks exceeded benchmarks for mercury levels that will impair the reproduction of fish eating birds.

In a National Park Service press release, Ecologist Colleen Flanagan Pritz states, “This is a wake-up call. We need to see fewer contaminants in park ecosystems, especially contaminants like mercury where concentrations in fish challenge the very mission of the national parks to leave wildlife unimpaired for future generations.”

Copies of the full study, Mercury in Fishes from 21 National Parks in the Western United States – Inter- and Intra-Park Variation in Concentrations and Ecological Risk, can be downloaded and viewed at the USGS website. Mercury contamination coming from outside Alaska poses a risk for our residents and it will be important to encourage further research and study of this issue here. This study specifically recommends toxicological assessments be made in Wrangell-St. Elias NP and Lake Clark NP.